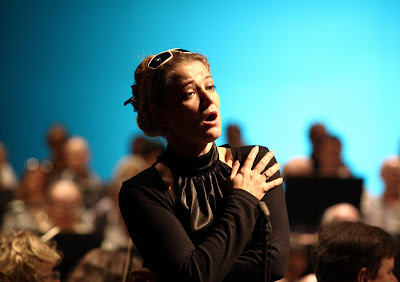 But there are still moments to savor, like the National Theater’s concert staging of two short one-act operas: Martinů’s Ariadne, and Stravinsky’s The Nightingale. Inventive pieces of 20th-century music that clock in at less than an hour each, the operas make a smart pairing, offering brilliant orchestration with enough points of contrast to provide a thoughtful and engaging evening. And the performances, under the baton of Music Director Tomáš Netopil, were quite good.
Martinů composed Ariadne in 1958, during a break in work on The Greek Passion – the second version, after the first was rejected as too unorthodox. If he was trying to trim the Passion to more familiar and acceptable contours, Ariadne is just the opposite, the work of a composer running freely and expansively with a dazzling range of ideas. By turns bright, ominous, playful and poignant, the score is a brisk exercise in infusing neoclassical forms with fresh energy.
The opera is based on Le Voyage de Thésée, a 1943 work by French playwright and friend Georges Neveux, who also provided the source material for Martinů’s Juliette (written in 1936-37, when the composer was living in Paris). The encounter between the title character, daughter of King Minos of Crete, and Theseus, slayer of the mythical Minotaur, has been a longtime favorite of opera composers, from Richard Strauss’ Ariadne auf Naxos (1912) back to Monteverdi’s L’Arianna (1608). In this version of the story, Ariadne and Theseus meet while both are awaiting the Minotaur – her for a romantic rendezvous, him to slay the beast. When the confrontation comes, Theseus finds he is confronting his doppelgänger: “Who would dare strike himself to death?” the Minotaur asks in a deep, cunning voice. Theseus must, but then he departs, leaving Ariadne to contemplate a lonely future.
This surreal retelling of the story is even more perplexing in Martinů’s abbreviated version. But as the program notes awkwardly point out, “Understanding this opera is not destined to find verbal expression.” It’s not logical, nor was it meant to be. It’s suggestive, dreamlike, symbolic, something straight from the subconscious.
The music runs the other way, providing an accompanying, often literal narrative, sometimes even commenting on, or reacting to, the vocal lines. Rippling strings set the mood for an opening waterfront scene, vibes clatter when there’s a knock at the door, drumbeats announce a portentous entrance, and periodically the pulsating main theme comes to abrupt halt with a single, sharp jazz chord on the piano. It’s a highly descriptive but never predictable score, constantly serving up unexpected turns and phrases, particularly from the percussion section.
Nearly one-fifth of the piece is given over to Ariadne’s closing lament, which soprano Simona Houda-Šaturová sang with more feeling than proficiency. Houda-Šaturová is one of the best singers in Prague, and typically owns the stage when she is on it. But this Ariadne is a demanding role that calls for both lyrical and dramatic talents, and Houda-Šaturová seemed to be reaching at times, biting off some of the high, dramatic notes. Baritone Aleš Jenis provided a strong counterpart as Theseus, and Ondrej Mráz nearly stole the show in his brief turn as the Minotaur.
Musically, The Nightingale is the inverse of Ariadne: a light subject with a serious score. The story is Hans Christian Andersen’s fairy tale about a Chinese emperor who chooses artifice over true art, and nearly pays a fatal price. The only significant change is the addition of three Japanese emissaries who bring the artificial bird. The music offers colorful if sometimes heavy-handed accompaniment, highlighted by brilliant coloratura lines for the title character.
Though it’s played as a single continuous piece, The Nightingale has two distinct parts that come with an interesting history. Stravinsky started work on it in 1909, then was interrupted by an offer to collaborate with Sergei Diaghliev and his Ballets Ruses. Over the next four years, Stravinsky wrote three of his defining pieces for them: The Firebird, Petrushka and The Rite of Spring. By the time he got back to The Nightingale in 1914, his compositional style had completely changed.
So the first half of the piece unfolds in very traditional fashion, with pleasant flute lines to introduce the bird, snatches of Eastern motifs and whimsical touches like the sound of frogs and cows accenting a straightforward opera score. Then the second half explodes with great changes of mood and timbre, serving up remarkable colors from rotating sections of the orchestra and a full chorus, and dramatic rumblings that could have been lifted straight from The Rite of Spring. It’s tempting to focus on the vocals, particularly the bravura coloratura flourishes. But the music is the real star of this work.
That said, soprano Olga Trifanova deserved the big hand she got from both the audience and the players for her performance as the nightingale. Her singing was sensitive and nearly flawless, an alluring blend of emotion and technical expertise. House regular Yvona Škvárová made a big impression in her brief appearance as Death, not so much for her singing as her costume, a glittering Darth Vader gown without the headgear.
Tomáš Netopil brings a lot of energy to the podium, which he manages to transmit to the orchestra without losing any clarity or control. The sound was sharp and nicely balanced. Netopil has done an impressive job with Mozart operas at the State Theater over the past couple years. This time out he showed a command of modern music as well, delivering an intelligent, nuanced performance.
And the National Theater orchestra, seated on the stage, seemed to be enjoying the break from the standard repertoire. They played with enthusiasm and flair, complemented by the usual steady work from the house chorus.
Given the attendance on Friday night, two performances of this double bill were probably enough for the local market. It’s unfortunate, as the music deserves to be heard by a wider audience. But give the National Theater credit for venturing into 20th-century fare, and adding a creative touch to the early-season schedule.
Posted by Frank Kuznik at 9:00 PM